In our first MicroLab we investigated bees. We did this for historical reasons explained below. But a first MicroLab, with for the first time our entire team in action, involved much more than “just” observing bees with early modern microscopes. It was a real passage into discovering the instruments we were able to use, the modern techniques our microphotographer Wim van Egmond is using to capture the microscopic observations through old microscopes, and the manifold talents and expertise that our team members are bringing to the table. These vary widely, for example the ability to draw, expert knowledge of dissecting insects, historical knowledge of the seventeenth-century sources, or knowledge about the various materials that could have been used in dissecting and observing specimens.

With the help of local beekeepers, we were able to collect plenty of bees and even two queen bees that had all died of natural causes. With these insects at hand the team started to explore the seventeenth- and early eighteenth-century microscopes of the collection of the Rijksmuseum Boerhaave. Under the guidance of the museum curators we were able to use many different microscopes. And we immediately realized that the microscopes gave very different results. An Italian Campani, double-lens microscope, for example, gave only a partial image, it showed only part of the bee. In contrast, the microscope made by Musschenbroeck which we were able to use gave a full overview of the bee, while a Leeuwenhoek microscope only showed us a fraction of the insect. To understand which part you are seeing one has to observe carefully and see another part, one has to “fiddle” with the insect to move it slightly.

A second, and potentially even larger point we were confronted with immediately, was the knowledge needed to dissect these tiny insects and prepare them for observation with a microscope. Our team members Frank Van Campen and Hans Huibregts are experts in the field of microscopic (insect) preparations. They were able to dissect the bees and show us the inner parts. One of the most interesting parts of this dissection practice was that the historians in the team had been looking for passages in the seventeenth-century sources with details about the dissections. These are very rare to find in the books and letters that we have of the period. But in order to prepare the specimens in the same way as our historical actors we needed details such as whether to dissect dry or in a liquid. Comparing the information from the source texts with the knowledge and expertise our of dissectors, we often tried several methods to see the varying results.

And why did we start with bees at all? Bees were observed by early modern microscopists and they quickly became a point of comparison and reference for microscopists. The first image that we have from the seventeenth century that was presented as the result of microscopic observations is of bees. In the context of the Roman Accademia dei Lincei Francesco Stelluti and Matthias Greuter published a broadsheet in 1625 depicting three bees with at the bottom the dissected parts of a bee. Bees were chosen for their symbolism as profitable and active animals, but also especially because the family crest of the recently elected Barberini Pope Urban VIII consisted of three bees. The investigation of bees was picked up by later microscopists: Robert Hooke looked at them and included his observation into his Micrographia (London, 1665), and Antoni van Leeuwenhoek’s first note to the Royal Society included observations of the bee. The bee had thus become a starting point for microscopists to understand what they were seeing, and understand their observations and instruments. Hence with these historical descriptions and images, we decided that bees were the perfect starting point for our own explorations and observations into the world of seventeenth-century microscopic practices. 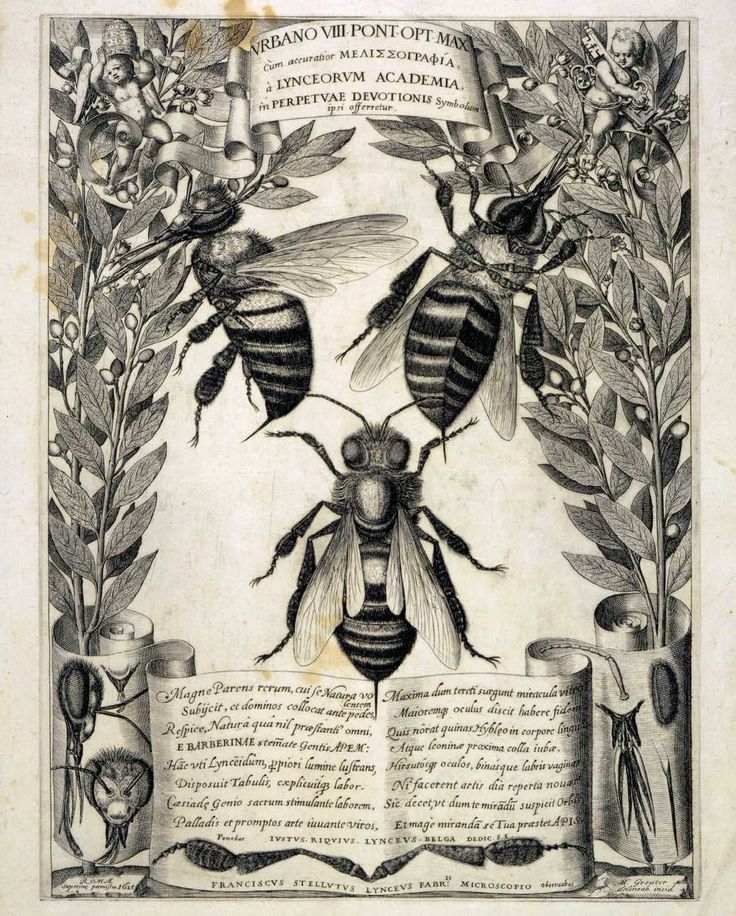